"The Sound of Waves" is an arts and science research project and an art installation commissioned by the Joint Research Center of the European Commission for Resonances: DATAMI and BOZAR - Palais des Beaux Arts, Brussels.


Resonances brings together scientists, artists and policy makers to discuss matters of concern from various points of view, not only to the JRC and the European Commission but also more widely to society. It is the flagship programme of the Joint Research Centre's SciArt project, held every two years at the JRC in Ispra (Italy). The Joint Research Centre (JRC) is the European Commission's science and knowledge service which employs scientists to carry out research in order to provide independent scientific advice and support to EU policy. The SciArt project intends to integrate art in the JRC's multidisciplinary work on an equal footing. The theme of the third edition of Resonances Festival is Big Data and identity, developed into the concept of Datami. Big Data have erupted in our daily lives and we want to join the discussion on how to turn Big Data into culture, not leaving it only in the hands of technicians, trolls and corporations. We want to become hackers of our own future. We think it is time we make them ours, these Big Data, this digital transformation, in a vast collective effort open to all.

The 'Sound of Waves' is a collaborative research curdling into an experimental art project that unites scientists and an artist. It focuses on migratory trajectories from outside the EU towards the EU and from poor EU countries towards the more developed and stable EU territories. The work translates migratory waves to a very concrete, material medium, even though the form remains rooted in poetry, the data the work is based upon, made available by JRC demographers working on immigration, is limited to the ten year period going from 2008 to the end of 2017, a time frame that proved to be crucial for a host of Eastern Europeans. Romania and Bulgaria joined the European Union on December 1st, 2007. After that date, Romanians left in masses towards Spain (reaching numbers of around 700.000 in population), Italy (1.1 million), France (around 200.000), the United Kingdom (around 390.000), and Germany (around 450.000). Entire areas of Romania became progressively depopulated and the country was faced with a workforce crisis. Doctors, engineers, architects, IT experts and economists left a big gap in Romania’s pool of experts. This was years before the Syrian Crisis threw a great number of Syrian refugees onto European shores. Combining various JRC researches and competences, the research team devised a novel solution made possible by the expertise of JRC scientists and technicians of the innovative Sensors (MELISSA) lab: a ferro-fluid installation with a diameter of 90 x 90 x 90 cm shows the different waves faced by the EU in an innovative set-up. The dark ferro-fluid is brought to “life” with the help of linear electromagnets, showing the successive waves of transition literally as waves transiting from one place to another. The migratory waves thus become literal waves of transition from one space to another, in a liquid form. The waves are coordinated through the use of a control grid. Each wave approximates in size and height the migratory paths from the 'not-so-developed' EU or non-EU to the developed EU. We used Eurostat data for the project. 66.7% of the input data is based on numbers of foreigners seeking asylum within the EU and 33.3% of the data was that of work migrants within the EU countries. Each wave represents one month of migratory data, starting January 1st, 2008 until December 31st 2017. Thus, each year has twelve waves, so that the 10 years will be represented by 120 wave frequencies. In this manner, the installation faces us with 120 waves of change. The ferro-fluid reaches a determined height, according to the electromagnetic strength given by the electromagnets. The strength also determines the distance between the electromagnet and the surface of the liquid, all in a predetermined sequence governed by an Arduino device. Each wave frequency lasts 6 seconds, so that the total duration of the entire set of sequences arrives at 12 minutes. As it is difficult to influence the amplitude, the different figures are expressed by a different frequency. The smaller the frequency, the faster the waves appear to move, indicating a high migration flow. Each frequency is calculated between a maximum delay of 15 milliseconds and a minimum delay of 230 milliseconds. The Eurostat data was provided by Daniela Ghio and Michele Vespe, and it was converted through a mathematical calculation, setting the overall minimal migration flow to 230 milliseconds (for lower figures) and the maximum to 15 milliseconds (for higher figures of migration). The larger the delay, the slower the waves appear to be moving and the smaller the delay, the harder is to spot the waves moving, since the human eye is incapable of spotting the differences. 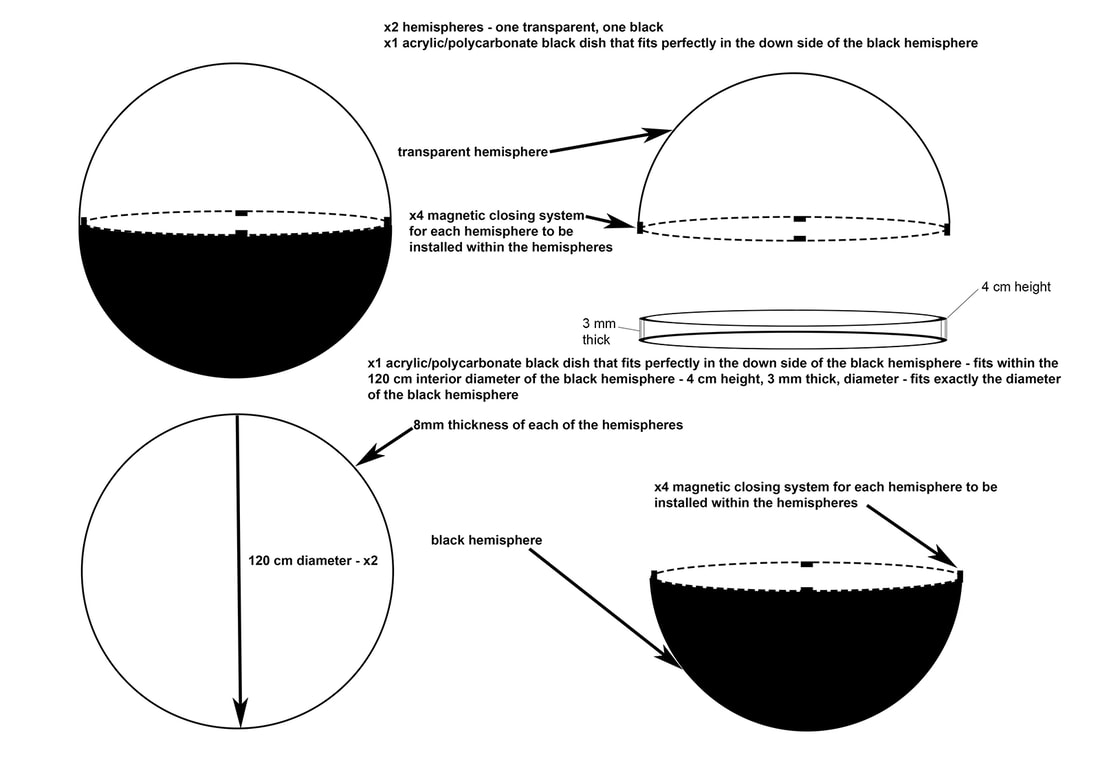 original technical drawing of the installation developed by Francesco Mugnai and Daniel Djamo, with an original sphere diameter of 120 cm, which was later reduced to 90 cm;