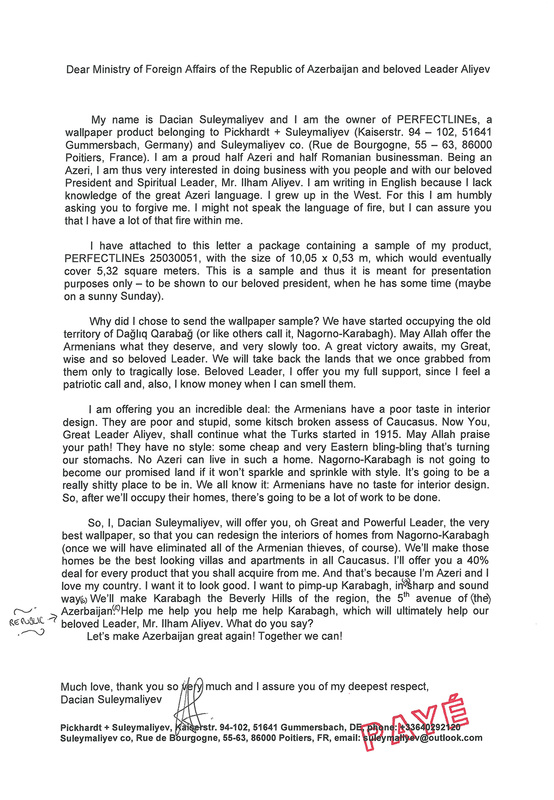 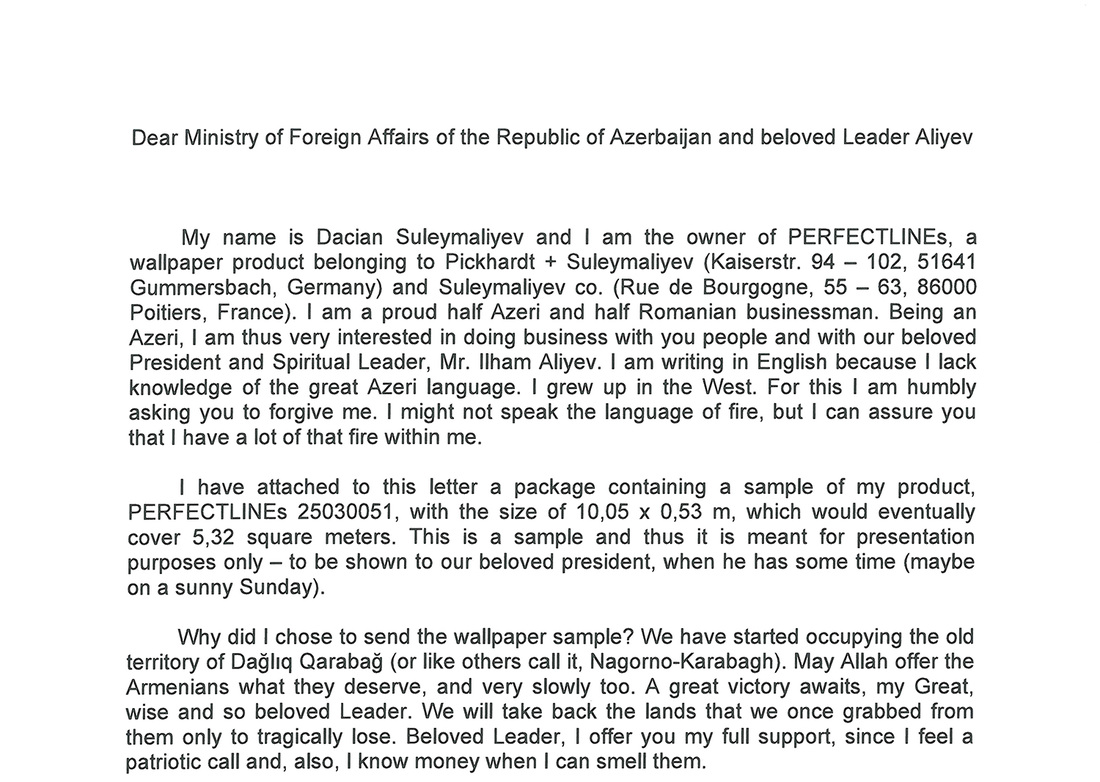 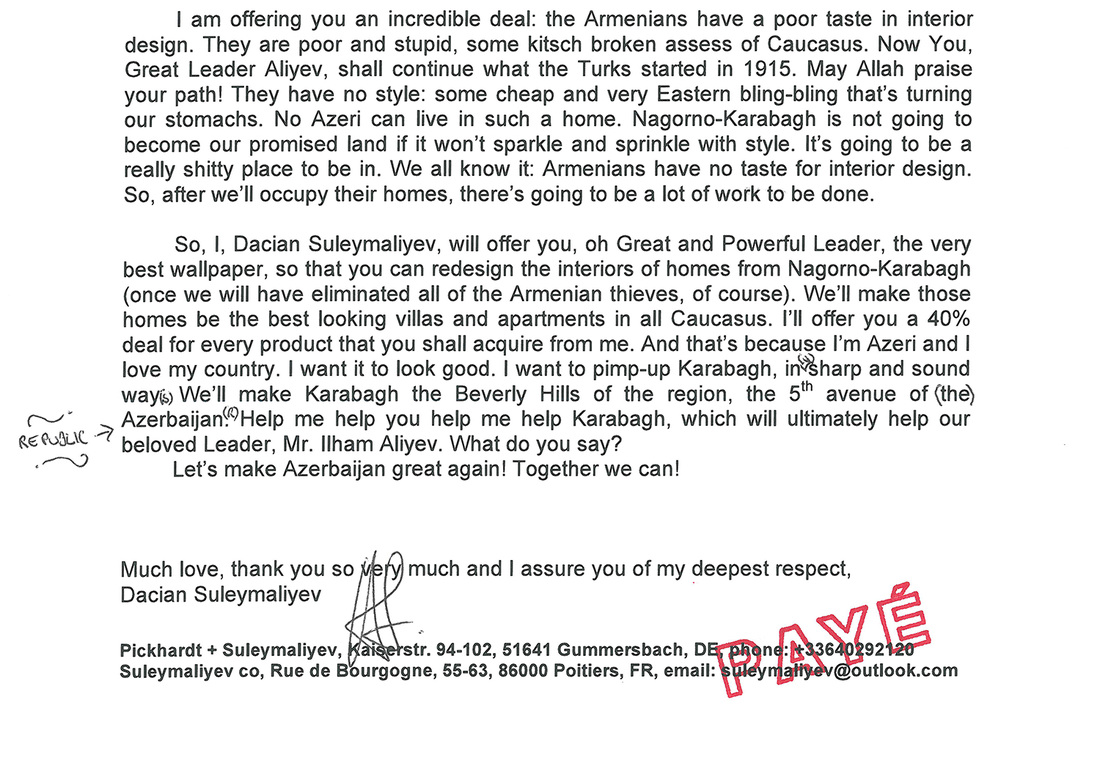 ​
After watching news reports that portrayed the shameful attacks carried out by Azerbaijan in the Armenian territory of Nagorno-Karabagh (beginning of April 2016) I was affected and I felt anger, since I am friends with many Armenians and I hold an even closer friendship with History. The attempt of invading a known ancient Armenian space seemed ridiculous, tragicomical: it is a fact that half of Turkey isn't actually Turkey and half of Azerbaijan isn't actually Azerbaijan, but the former Kingdom of Armenia. Having taken into consideration the Middle East crisis, the recent ISIS attacks on Western European capitals and the several military conflicts that were developing in Africa, it became clear: the history repeated itself. Just like Turks tried to eliminate Armenians in 1915, the agile and business-focused Baku regime tried dealing with its Armenian problem in a time of turmoil and hardship. To put it short: they hoped that the international community would turn a blind eye or involuntarily ignore it (being overwhelmed with events). And they were mostly successful: not a lot of attention was given to Azerbaijan's attacks. Few media outlets brought to light the chemical weapons desired to be launched upon Armenians in that period. To put it even shorter: the poor souls of Karabagh barely avoided a blitzkrieg.

Days passed and I couldn't let it go. So, I crafted an alter ego, a cousin of Dacian Sarbu ("RULAND" project). His name was Dacian Suleymaliyev, a half Azeri - half Romanian businessman, based both in Germany and in France. I developed him in a way that would best express the inner construction of the demagogical Ambassador of Azerbaijan to the US, Mr. Elin Suleymanov and the sneaky and KGB-like Elmar Mammadyarov (Azerbaijan's Minister of Foreign Affairs). Suleymaliyev sent a package and a letter to the Ministry of Foreign Affairs of the Republic of Azerbaijan on April 21st, 2016. The package was destined to be presented to Mr. Ilham Aliyev, the Supreme Leader of Azerbaijan. It contained a wallpaper sample and an offer of a 40% deal. Being Azeri diaspora, he couldn't write well in Azeri. This is why he decided to use English as the main language of communication.

The package was sent on April 21st, 2016 through the French Post, by Colissimo. Sending costs from Saint-Jean-D'Angely to Baku: 19,30 euro.

I am a fast writer. I write quickly and with ease. Still, I have a big problem: most of the time I do not look upon what I have written. I find it irrelevant to look upon what I've left on paper in the past. I am focusing on the future, on what lays before me. This is the reason why my texts have some spelling errors. I write them in a heartbeat, without checking or re-checking. Although I am aware of this, I always choose to leave them as they are, considering that these faults can be interpreted as an own mark, something to be expected from me (by the people who know me closely and are aware of my manner of writing). If one would judge harshly, partial superficiality would be attributed to my way of working. I am interested in the content, not so much in the way something looks.

When I wrote the letter to the Ministry of Foreign Affairs of the Republic of Azerbaijan I made two faults. Having printed a sample, I marked the two errors and thought what should be done with them. I decided to keep the letter as it was, with the original - quickly written text, as I considered it to be a mark of authenticity. It is obvious that an Eastern-European from the Caucasus region might be the victim of some spelling errors. So, in order to make the text breath even deeper, I chose to send it with these faults.

the walk towards the post office + sending the package from Saint-Jean-D'Angely (La Poste, Colissimo) -> Baku:
​
photos taken by: Clara Antony

This project was developed during the writing Residency of Abbaye Royale de Saint Jean d’Angély, Odyssée Program – ACCR, with the support of the French Ministry of Culture and Communication
​