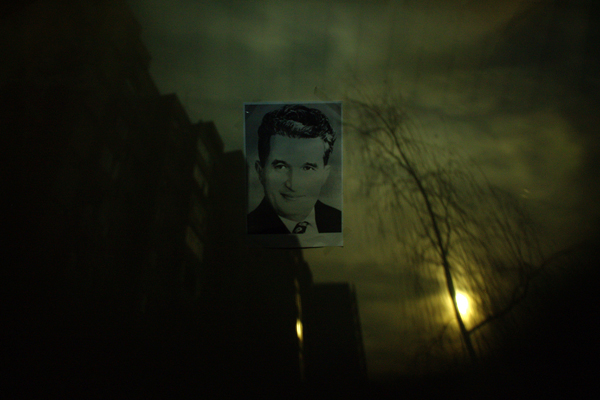 
At the end of 2009 I transformed my room in a camera obscura, after seeing Abelardo Morell's work. I diverted the image, using a mirror, on the ceiling.
It came to be projected exactly over my bed.
I stayed in the dark until the end of June 2010, never having real daylight flooding my chamber, only a projection of what was before my windows.

After admiring the architecture of the blocks built from 1977 until 1982 (during the Golden Age) that surround the place that I live in (a flat in a block from the same era), I decided to pay tribute to the already clichéic theme of communism, by placing a well known portrait of Ceausescu on my ceiling using cheap-transparent ducktape, over my camera obscura projection, during a sunset.

The result was set to be a cheap interpretation of the end of the Golden Age, a translation of its twilight.