Sixteen routes to the perfect sunshine / 2017

»My friend, the truth is always implausible, did you know that? To make the truth more plausible, it's absolutely necessary to mix a bit of falsehood with it. People have always done so.« Fyodor Dostoyevsky, Demons

The concept of the exhibition Sixteen routes to the perfect sunshine from the Romanian artist Daniel Djamo leads us in the fictional future, the year 2028. The reality it creates is dark, as the future brings the downfall of the European Union and the creation and formation of authoritarian and xenophobic countries. These countries build walls and fences on their borders, which interfere with the flow of people, who have found themselves in dire situations. The artist's narration seems impossible at first, the Orwell like future just seems fictional.
The author claims that he does not wish to be descriptive and politically engaged, as he wants the audience to perceive his exhibition from the aesthetic point of view. With this position, he is somehow getting closer to subtle manipulation, as the exhibition contains multiple symbolic meanings and we can therefore interpret it in multiple layers. With it, the author is referencing different fields, from history, politics and mythology to personal experiences and imagination, which is not revealed to us at first. In the text, accompanying the exhibition, he mentions future Romania as a country, which will have sold all its oil reserves to Austria and the gold reserves to Finland, which has already happened during the Second World War, when the Third Reich gained their oil fields. With this he incorporates the reoccurring of history, the current political status, such as the building of walls and physical obstructions on borders, all of which he projects into the year 2028, when Romanian immigrants are at the last stage on their way to Munich. With this, he gives the fictional future some credibility, which brings it closer to becoming a possible reality.
We begin to experience the exhibition, which spans over the entire gallery, with the conceptual text, which is continued upon an amassment of strained threads, which begin at different points and ending in the same point on the other side of the room. They represent the different paths of 16 Romanian immigrants, who traverse the way from the plentiful Romania to Maribor, where they are currently at in the future. The artist offers the spectator a pencil, with which the spectator can name the migrants and with this gesture, give them an identity, with these actions strengthening the credibility of the author’s version of history, as we, with our actions, are reviving the non-existent. With the incorporation of false facts, we get closer to the term “post-truth”, which marks the current politic status and the society, which avoids feeling and personal convictions when deciding the common opinion.
The thread alone symbolises the red thread of the installation. They go from the starting point to the final point, Maribor, uninterrupted and continue to constantly return to the starting point, Romania, from where it spreads through different pieces of wood from forests, which represent an element of home regarding their home country, which the author and Romanian folklore regard as their Romanian twin. Past them, the thread runs all the way to the reel of thread on the pedestal, which is additionally illuminated and represents the uncertainty of the future, as the path is not over yet symbolic. It is waiting for the final push through the border towards Munich.
During the setup of the installation, the artist took care of the uninterrupted line of threads, which made the whole setup more difficult, but has with this achieved the symbolic meaning of the thread of life, which we know from Greek mythology, where the Moirai sisters weave, measure and cut the threads of life, curbing the fates of individuals with their actions. An interrupted line symbolically means death, as the migrants, although fictional, deal with similar problems as the real ones do. A stop before an obstruction on the path means stagnation and distancing from the goal of every path, the promised land of the perfect sun. The stop in Maribor calls up images of the recent wave of migrant escapees, who were stopped at the obstructed Austrian border as well.
At this point the author again incorporates the real history into the fictional future, which again allows him to add a little possibility to his incredible prediction. He subtly intertwines the contrary facts of fiction and reality, with which it is easier for him to convey his views, as he states that facts and descriptivism do not do well for him, so he prefers to express himself through fiction and jokes. With this standing, he is getting closer to the commonly quoted statement of Oscar Wilde: “If you want to tell people the truth, make them laugh, otherwise they’ll kill you”. 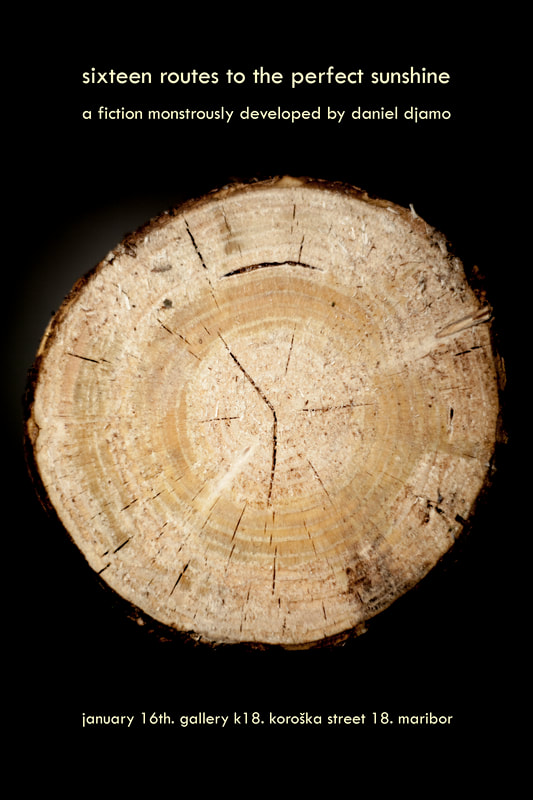