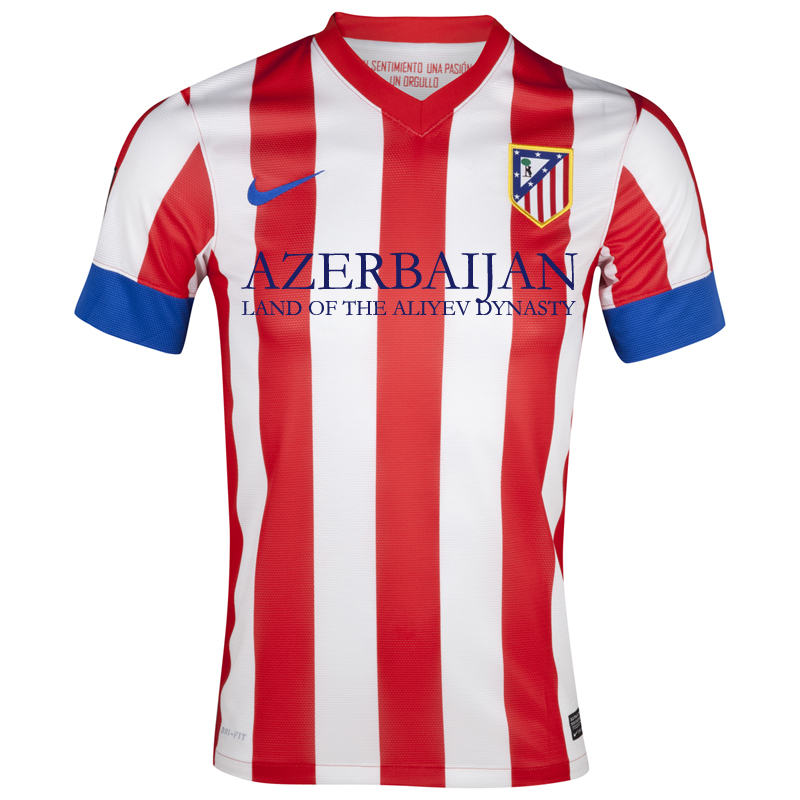 
In November 2012 Atlético Madrid decided to sign a contract with Azerbaijan's tourist authority for €12 million per season.
According to the deal, the Spanish football club's shirts have been marked with Azerbaijan's logo (the slogan "Land of Fire").

I decided to pay a deserved tribute to Mr. Aliyev and to the current president, continuing the Romanian-Azerbaijan friendship started by Mr. Horia Garbea.

Heiydar Aliyev was the classical dictator.
Already a Major-General, he became director of Azerbaijan's KGB in 1967.
He started ruling in 1969, when Leonid Brezhnev appointed him as First Secretary of the Central Committee of the Azerbaijan Communist Party.
In 1982, Yuri Andropov made him First Deputy Chairman of the Council of Ministers of the USSR. In 1987, he was forced to resign, after Mikhail Gorbachev accused him of corruption, but continued to have a huge influence over Azerbaijan. In 1993 he became president, position which he retained until his death, in 2003.
The Aliyev family has a wealth that can not be justified and is hard to even calculate, in a country that fought poverty until recent years. With a tremendous number of offshore accounts and with a lot of the country's oil coming their way, the Aliyevs represent a true democracy.
Freedom of speech in Azerbaijan is truly respected by the Aliyev family.
Emin Milli and Adnan Hajizade, activists and bloggers, served 17 months in jail (after being attacked and beaten), from 2009 to 2010.
The reason was that they posted a satirical video on YouTube.com, in which they staged a conference with a man wearing a donkey suit, mocking the $82.000 spent by the president in order to buy two donkeys from Germany.


Much more than a sponsorship

​
"For a while now Atletico Madrid has been working on a strategic international expansion plan to introduce its brand in certain markets in the world, to identify new growth opportunities and business for the club and to consolidate its position internationally.

Azerbaijan combines luxury and tradition.
As a sports entity we think that football, with its social significance, the media dimension that reaches internationally, and the values it represents, is a strategic tool to bring cultures together and strengthen links between peoples and towns.

Within this framework, Atletico Madrid has recently launched a special project topromote the image of Azerbaijan and publicized resources about the benefits of this country around the world, to help with this the Atletico players wear the logo 'Land of Fire Azerbaijan' on their shirts.

There are few tools or devices on the market capable of achieving a global impact of great magnitude as on the shirt of a football team, the main identifying element of a club-so thanks to this sponsorship, the name of Azerbaijan will reach all over the world in the hands of Atletico Madrid.

Azerbaijan is a country with great economic potential, it is one of the economies with the highest growth rate in the world. Noted for its energy sector, since two thirds of the country's area rich in oil and natural gas. It also has a strategic location, being the crossroads of some of the most important roadways internationally.

But Azerbaijan is primarily a country that wants to grow and invest in its development as a tourist destination, as well as modernization and innovation in the field of science and technology, to help boost its economy.

Azerbaijan is a strategic business centre.
The link between Azerbaijan and Atletico Madrid is much more than a traditional commercial sponsorship associated with a shirt sponsorship, because it has a tremendous value, as the tool to achieve important goals, through actions of a different nature, sports, commercial, communication, marketing and corporate social responsibility for the benefit of all parties.

To do this, the two entities will have the collaboration of the coach and Atletico players, whose image is the main advocate of a brand and will deliver projects to assist with their expansion and development.

This is emphasised by the activities that the club wants to carry out in order to improve the level of football in a country that has already demonstrated their passion for the sport, such as training programs for young players that Atletico Madrid has planned in Baku and Madrid.

This will be done also with the hope that the link established between the club and the country, thanks to the entrepreneurial vision that both parties have had, will serve to promote future bilateral relations between Spain and Azerbaijan, in all areas and sectors of interest to both countries."