„needs” is made out of two pieces: a supermarket bill and an akathist.

A bill of my needs for two weeks, while I lived in Vienna in the summer of 2014.﻿ 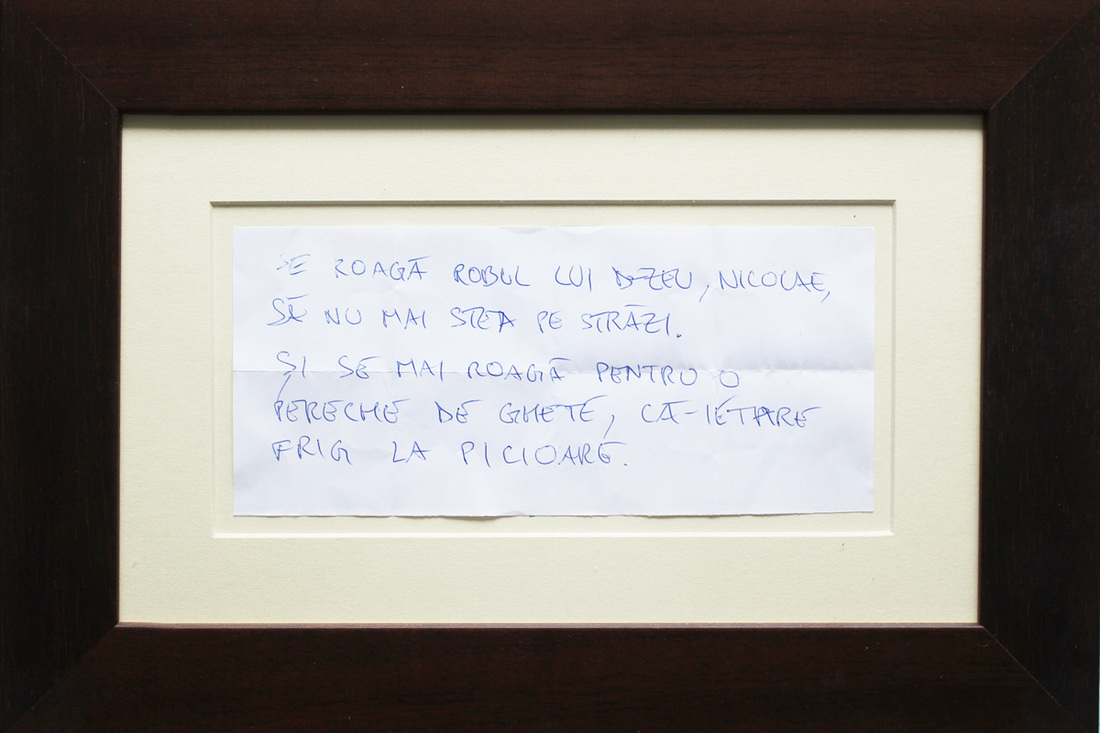 I am not a believer. I do not consider myself a good Christian. But I feel good in churches (in both meanings, equally).
I like their smell and the tranquility that one can find within their walls.
On February 5th, 2014, at around 12:30 PM, I entered Sfantul Gheorghe Nou church, downtown Bucharest.
After passing by the grave of Saint Constantin Brancoveanu, I stopped in front of the icons, in an attempt to listen to the calm.

While resting for a couple of moments with my eyes closed, I got the impression that someone was trying to get my attention. "Psssst!" I tried to ignore it.
The noize continued. It really pissed me off. When it was no longer bearable, I opened my eyes and turned to my right, towards the direction of the sound. I was a bit angry. Before me was a man of around 30, who had a piece of paper in his left hand and a pen in his right hand. He smiled, with the face of someone who was holding a winning lottery ticket.

"I am sorry to have bothered you, but I don't know how to write. Can I please ask you to write an akathist for me?"

"The servant of God, Nicolae, is praying, asking to no longer live in the streets.
And he's also asking for a pair of boots, because his feet are really frozen."

I looked down. He had an old pair of sneakers.

"You wrote God the wrong way (I had written quickly, D-zeu instead of Dumnezeu - I used an abbreviation). That's not nice. Can you please write again, with Dumnezeu instead of D-zeu?"

I wondered how he was able to read what I had written, considering that he didn't knew how to write, but rested silent.
So, I wrote again the akathist. The first one found its way into my pocket.

"I'm not doing well. I am unemployed for 3 years. God is my only hope. Thank you."

He turned, waiting for the priest.